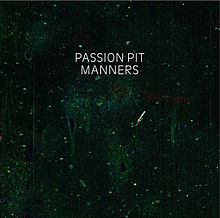 Manners is the debut studio album by American electropop band Passion Pit, released on May 15, 2009 by Frenchkiss Records and Columbia Records. “The Reeling” was released as the album’s lead single on May 11, 2009, and its music video premiered on YouTube on April 21, 2009. A second single “To Kingdom Come” was released in August 2009, followed by “Little Secrets” in December 2009. “Sleepyhead” was originally included on Passion Pit’s debut EP Chunk of Change (2008), but was mastered for inclusion on Manners (none of the tracks on the EP were mastered).

Pitchfork Media announced on March 16, 2010 that Frenchkiss Records would release a deluxe edition of the album on April 13, 2010 with three bonus tracks and new artwork. The bonus tracks included stripped-down versions of “Moth’s Wings” and “Sleepyhead” and a cover of The Cranberries’ 1992 song “Dreams”, which the band played live on their 2010 world tour.